PhD Student Emil Have has written the following article as part of our series of Student Research Articles!

My research concerns string theory in a broad sense. One of the particular areas that I study is the "holographic principle", which stipulates an equivalence—or duality— between a theory of quantum gravity and a theory without gravity in fewer dimensions. Currently, the best understood holographic duality involves supersymmetric gravity in five-dimensional anti-de Sitter spacetime, which is dual to four-dimensional maximally supersymmetric Yang-Mills theory. This is known as the AdS/CFT correspondence. In reality, the supergravity theory emerges as a limit of superstring theory, and it is in this limit we understand the duality best—although the correspondence is conjectured to extend to the full string theory. Due to the complexity of the theories involved, it is of great interest to look for more tractable manifestations of the holographic principle. This can be achieved by looking at non-trivial limits of these theories—for example, we could zoom in on the 'non-relativistic' sector of the correspondence, where Einstein's principle of relativity reduces to that of Galilei. The theories simplify in this regime, although many features remain unexplored. As well as providing invaluable 'data points' for our understanding of holography, these frameworks have potential applications to strongly coupled condensed matter systems.

Moreover, the mathematical tools and ideas originating in string theory often find applications in seemingly disparate areas of physics. For example, it was realized in the context of non-AdS holography that the geometry of the gravitation-less theory dual to Lifshitz gravity—where time and space scale differently—is a torsionful generalization of Newton-Cartan geometry that was called torsional Newton-Cartan geometry (TNC). Newton-Cartan geometry was originally developed in the 1920s to provide a geometric foundation for Newtonian gravity—a goal that it did not, as we shall see, quite achieve. Locally, this geometry realizes the Galilean principle of relativity, and as such it provides a covariant framework for describing systems with symmetries that are approximately Galilean. As alluded to previously, this class of systems contains all of condensed matter. As a specific application of these ideas within the context of soft condensed matter, we have developed a theory of submanifolds in TNC geometry, which we combined with hydrodynamics to define actions for fluid membranes with Galilean symmetries. The covariant inclusion of time allows for a description of additional effects such as the dispersion of elastic waves, since our description lends itself to the application of hydrostatic partition function methods, where geometric quantities are identified with hydrodynamic variables such as temperature and fluid velocity. This novel framework has allowed us to extend previous models developed by Canham and Helfrich describing red blood cells and other biological structures.

Within the realm of fluid dynamics and geometry, we have furthermore developed a theory of fluids that are not necessarily invariant under boosts (a boost, roughly speaking, is a transformation that takes you from one frame of reference to another, which moves with constant velocity with respect to the first) on arbitrary curved surfaces. The underlying geometry of such boost-agnostic fluids is sometimes known as Aristotelian geometry and shares some features with TNC geometry. Once boost symmetries are restored, this theory reduces to the well-known cases of Lorentzian (relativistic symmetries) or Galilean (non-relativistic symmetries) fluids—and even one type of Carrollian fluids (ultra-relativistic symmetries). Another example of a fluid which falls within this description is the Lifshitz fluid, which has an anisotropic scaling between time and space and no boost. It turns out that the absence of boosts leads to a proliferation of transport coefficients, which are constrained by the second law of thermodynamics: namely the condition that the production of entropy is positive. We worked out the details of this theory up to first order in the derivative expansion emphasizing a geometric approach.

Recently, a notion of gravity that lies between the ideas of Newton and Einstein has been developed and dubbed "non-relativistic gravity". Such a theory is defined by carefully expanding the fields of general relativity in inverse (even) powers of the speed of light. This theory goes beyond Newtonian gravity by correctly describing the time dilation caused by strong gravitational fields. Geometrically, this 2 theory is described by "type II Torsional Newton-Cartan geometry", which extends the original TNC geometry in a subtle yet crucial way. This theory fills an important and previously vacant spot in the 'space of theories' (depicted in the Bronstein cube above), thereby paving the way for a quantum theory of non-relativistic gravity, which could provide important hints towards understanding the full theory of quantum gravity. Apart from this lofty pursuit, non-relativistic gravity likely has interesting holographic properties, while also being the correct background geometry for quantum mechanics when gravitational phenomena are involved. 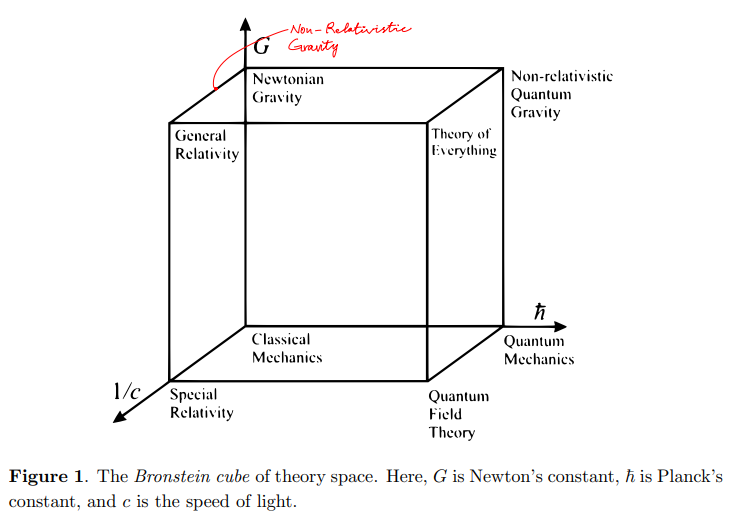